Under the leadership of Michael Collins, Frongoch Internment Camp became known as the ‘University of Revolution’.

Following the failure of the 1916 Easter Rising, Collins and thousands of other rebels were arrested by the British authorities. Many of the the uprising’s leaders such as James Connelly and Patrick Pearse were executed. Collins was fortunate not to be executed despite having fought at the Dubin GPO, the centre of the uprising. Collins and the other rebels were later imprisoned at Frongoch.

At Frongoch he was one of the organisers of non-cooperation with the British authorities. The camp proved an excellent opportunity for networking and training in guerilla tactics for the republicans. Up to then they had been in small, scattered groups across Ireland. 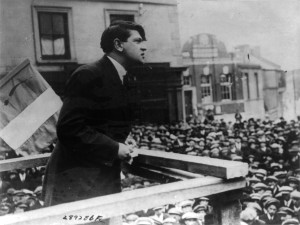 Collins became highly respected amongst the prisoners and on release went on to become a leader of the newly formed Irish Republican Army (IRA). Their far more successful armed campaign forced the British government to promise to pull out of Ireland.

Eamonn de Valera gave Collins the unenviable task of negotiating a settlement with the British Government. Both realised that the British would not really conceded terms most Irish Republicans were demanding.

In 1921 three months of talks took place in London with British Prime Minster Lloyd George. Collins was forced to agree that Ireland that could only partly govern itself. Ireland would have to remain part of the British Empire with the six northern counties partitioned to stay part of the United Kingdom.

When he signed the treaty Collins is said to have commented: “I tell you, I have signed my death warrant”.

On returning to Ireland he was accused by many, including Eamonn de Valera, of having betrayed the cause for which so many had fought and died. De Valera and many other republicans decided to carry on fighting for full independence leading to a civil war between 1922 and 1923.

Collins was appointed chairman of the pro-treaty government of Ireland and commanded the forces against those who apposed the treaty. On 22 August, 1922 the 31-year old Collins was killed when his armoured convoy was ambushed at Beal na mBlath, County Cork. 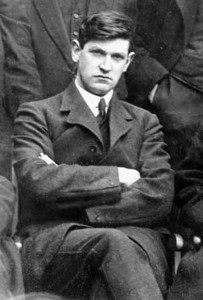 Michael Collins is now concidered by many to be a legendary and romantic hero who met a tragic end. A Hollywood film has even been made of his life story.

As a military and political genius he led a small force of guerrillas to fight the British empire, and forced the British to the negotiating table.

The tactics that he developed caused him to be regarded as one the father of 20th century urban guerrilla warfare. Future revolutionaries such as Soviet leader Lenin, China’s Mao Zedong and Israel’s Yitzak Shamir studied and adopted Collin’s tactics. In fact, Shamir admired Collins so much that he used the code-name Michael during the Israeli war of independence.