What was the Easter Rising? What happened in 1916? Who was fighting who and why?

The English occupation of Ireland began 900 years ago and was resisted fiercely throughout the centuries. Many rebellions and wars were bloody put down by the English forces only resulting in further dissatisfaction with colonial rule.

In the 16th-century England became staunchly Protestant whilst Ireland remained mostly Catholic. Many prohibitions were placed against the Catholics thus resulting in further discontent and rebellions.

In 1801, following another uprising, an Act of Union was imposed. This took direct control of Ireland as part of the United Kingdom of England, Ireland, Scotland and Wales.

Direct rule was disastrous for the Irish. Between 1845 and 1851 two million people died in famine or were forced to emigrate from Ireland. The population of Ireland has never since reached its pre-famine level of 8 million.

The Gaelic League (Conradh na Gaeilge) was founded in Dublin in 1893 to campaign for the language. Most of the leaders of the Easter Rising were members of it. 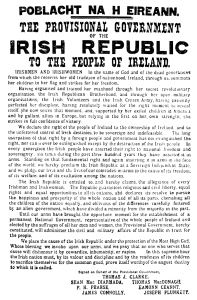 Years of further attempts to win self government for Ireland culminated on Easter 1916. Small groups of poorly-armed Irish separatists occupied prominent buildings most notably the General Post Office in the centre of Dublin. Here a proclamation of independent republic was read out.

The uprising triggering a week-long battle. The rebellion left almost 500 dead and parts of Dublin destroyed. The British authorities put fifteen of the leaders on trail and executed them. Those rebels who were not shot were sent to a make-shift Internment camp in Frongoch in Wales.

The shooting of the leaders rallied support amongst the wider Irish population. By 1917 large crowds turned out in Dublin to greet rebels as they returned from Frongoch.

A far more successful armed campaign, by the newly formed Irish Republican Army, forced the British government give a promise to pull out of Ireland. 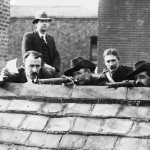 In 1921 ex Fron-goch prisoner Michael Collins lead Irish negotiations with the London govenment. They were forced to agree that Ireland that could only partly govern itself. In the Treaty 26 counties of southern Irleand would stay part of the British Empire with the six northern counties partitioned and remaining part of the United Kingdom.

Many Irish thought they had been betrayed and decided to carry on fighting for full independence.  A year long civil war broke out in 1922. The pro-treaty forces eventually winning.

Before the Easter Rising in 1916 the British Empire was the largest and most powerful in the world. Inspired by the Irish example, peoples in Africa and Asia struggled to free themselves from foreign rule. Forty years later the English and other European powers had lost nearly all their overseas colonies.