Following the 1916 Easter Rising 1,800 Irish prisoners, including Michael Collins, were imprisoned in an old whisky distillery at Frongoch near Bala. Frongoch has a unique place in the history of these islands but was largely overlooked until recently.

The camp became a fertile training ground for organising against the British rule of Ireland. Able leaders gave lessons in guerrilla tactics. The camp became known as ollscoil na réabhlóide, the ‘University of Revolution’.

The camp was originally used during the early stages of the First World War to house German prisoners in the abandoned distillery and makeshift huts. In the wake of the 1916 Easter Rising in Dublin, the German prisoners were moved and it was used for the internment of 1,800 Irish prisoners. 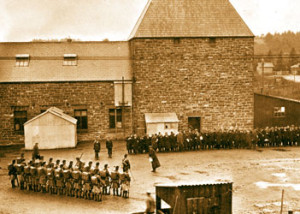 Conditions at Frongoch were poor, buildings were bitterly cold and infestated with rats.

The camp proved an excellent opportunity for networking and training for the republicans.  Up until then they had been in small clandestine groups across Ireland. Released in 1916 the prisoners returned to Ireland and helped form the Irish Republican Army. The IRA’s far more successful armed campaign forced the British government give a promise to pull out of Ireland.

The village of Frongoch and surrounding area are strongly Welsh speaking, the equivalent of an Irish Gaeltacht. What did the prisoners and local population think of each other? Author Lyn Ebenezer has suggested ambiguous feelings of antagonism and sympathy. It is said that some of the prisioners, including Michael Collins, made attempts to learn Welsh whilst at Frongoch.

Ysgol Bro Tryweryn junior school now stands on the site of the former camp. A commemorative plaque stands nearby, with inscriptions in Irish, Welsh and English.